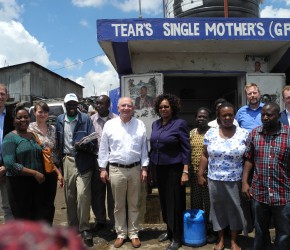 Peter Götz and the Chief Executive Officer of the Water Services Trust Fund, Eng. Jaqueline Musyoki (center), together with representatives of KfW, GIZ and African partners at a water supply kiosk in Mathare Village, Nairobi.

At the invitation of the Executive Director of UN-Habitat, Dr. Joan Clos, Peter Götz MP took part in the 24th Governing Council of the United Nations (UN-Habitat), in Nairobi, in his capacity as President of the Global Parliamentarians on Habitat (GPH). Götz requested the participating parliamentarians from around the world to promote clear rules for sustainable urban development in their national legislation and to provide increased funding for the implementation of these laws.

At a meeting of the Board of Directors of the Global Parliamentarians on Habitat which was chaired by Peter Götz, the board members whom Götz had invited to Nairobi to the Board Meeting reported on their progress and on activities in their countries and regions. In addition, decisions on the upcoming events of the GPH were made.

Amongst other things, the next European Conference of the Global Parliamentarians on Habitat, at which ED of UN-Habitat Dr. Joan Clos is expected to attend, will take place on 17 and 18 October 2013 in Split, Croatia. According to Götz, the 25th anniversary of the international organisation of parliamentarians GPH will also be celebrated at this occasion. Another upcoming parliamentary meeting is planned in Arusha, Tanzania.

Together with representatives of the KfW, GIZ and Kenyan partners, Götz visited a water supply project financed jointly by Germany and the EU in Mathare Village, one of the largest slums in Nairobi with about 500 000 inhabitants. At various kiosks the poorest of the poor are afforded the opportunity to receive clean water on favorable terms in 20 liter jerry cans. The project is also supported by the Bill-and-Melinda Gates Foundation.

Götz: „It is impressive to see the effort made to improve the quality of life of the slum dwellers who have often lived there for generations“.

Since 2008, Peter Götz is President of the Global Parliamentarians on Habitat (GPH). The GPH is an international network of Parliamentarians who are committed to the sustainable development of settlements. They work together closely with UN-Habitat, the United Nations Human Settlements Programme.

The Governing Council of UN-Habitat is held every two years at the United Nations headquarters in Nairobi, Kenya. The topic of this year’s Governing Council from 15 to 19 April 2013 is „Sustainable urban development: the role of cities in creating economic opportunities for all, with special emphasis on youth and gender.“